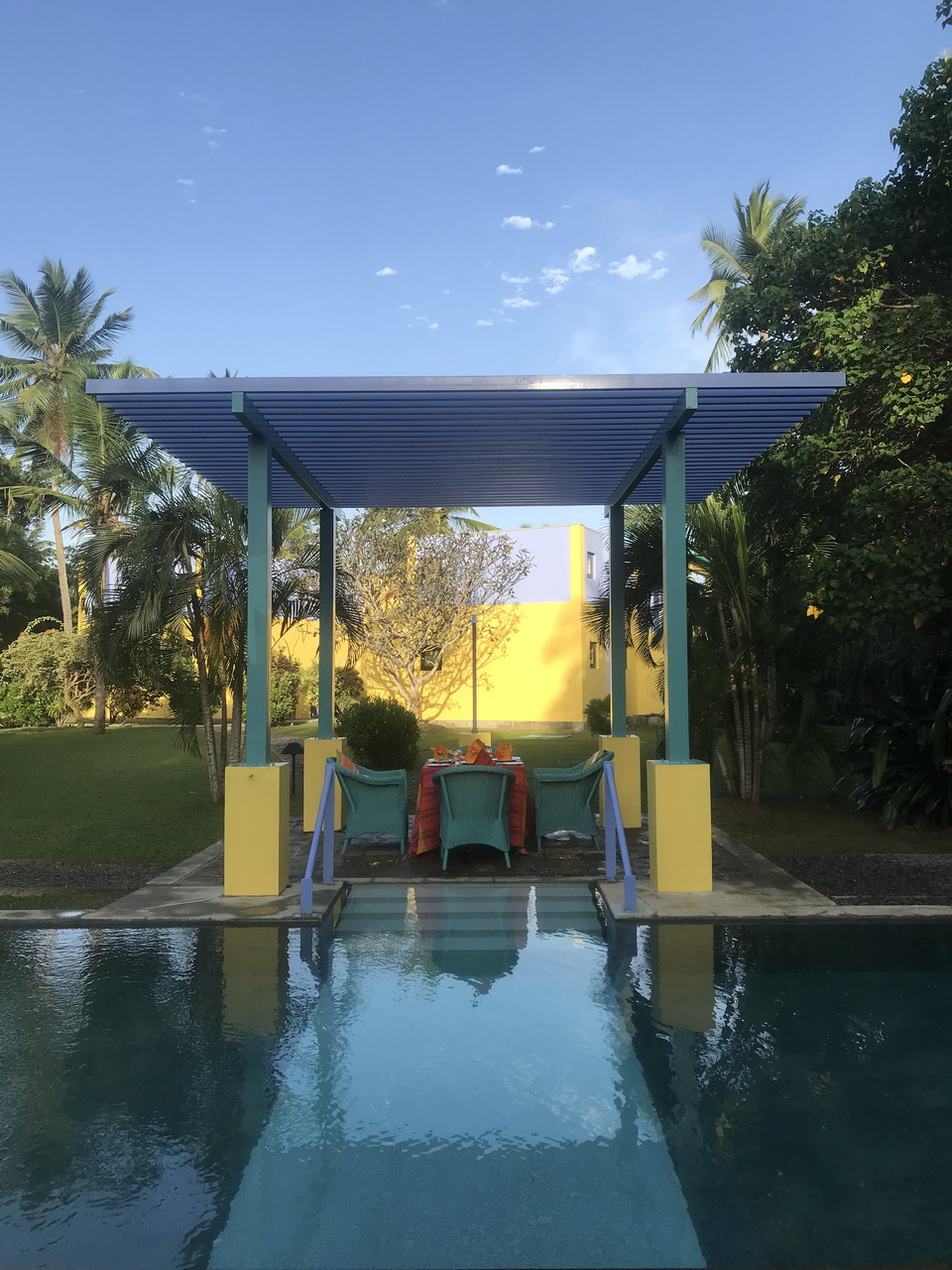 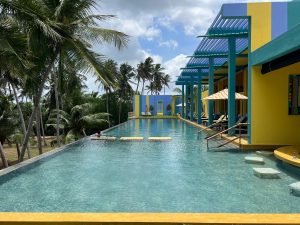 In addition to our main 33m infinity pool at the Oceanfront facility you’ll find a second, smaller and more intimate pool on the other side of the property. This second pool was originally the first we built and is still popular with our regular guests, small groups and those learning to swim.

The main pool extends into our bar, with pool seats so you can cool off while throwing back your favourite cocktail! 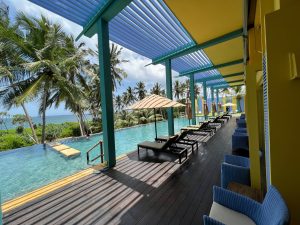 From floorboards to lawns there’s plenty of space to spread out and soak up the rays, with plenty of loungers to go around and handloom pool wraps to kick off your shoes and lay back on.

The Oceanfront deck is the idyllic place for a table under the stars, just reserve one during the day, it tends to be a popular spot to dine.

Read a book, enjoy a snack and work on that perfect tan while you’re at it. 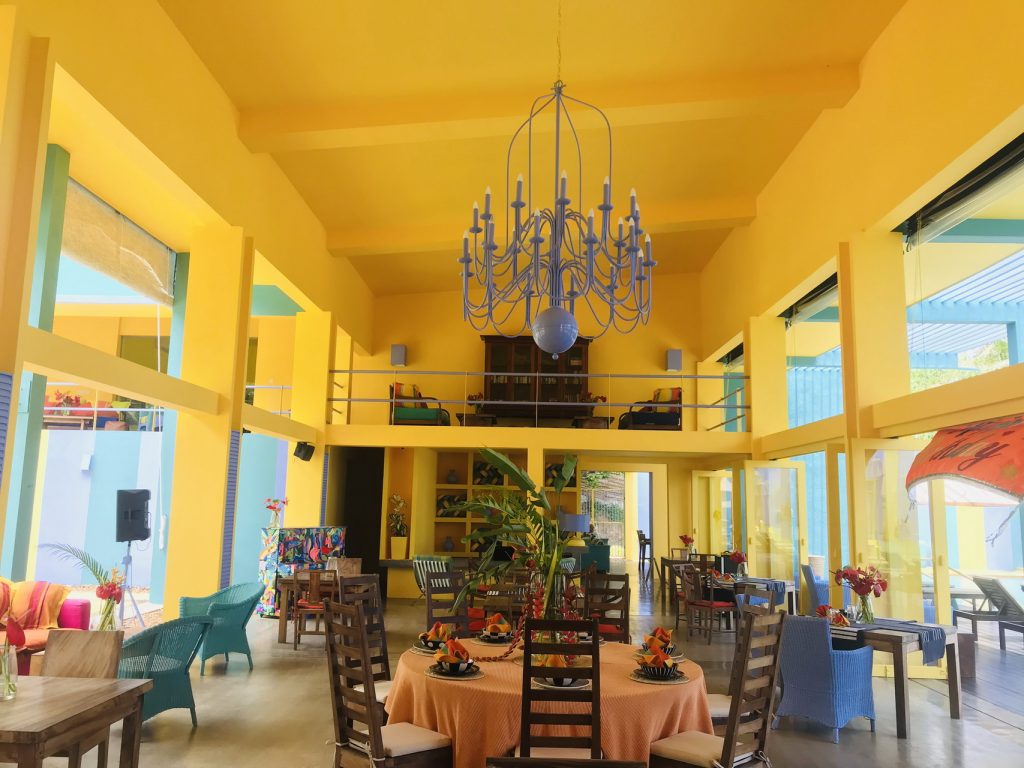 A mezzanine space overlooks the restaurant to the sea, and features colourful comfy sofas and a book case. Library, lounge, work place, viewing gallery, group space – make it what you want and make it yours!

Whether for a mid-morning snack or pre-dinner canapé, let the tropical breeze and vistas make your day. 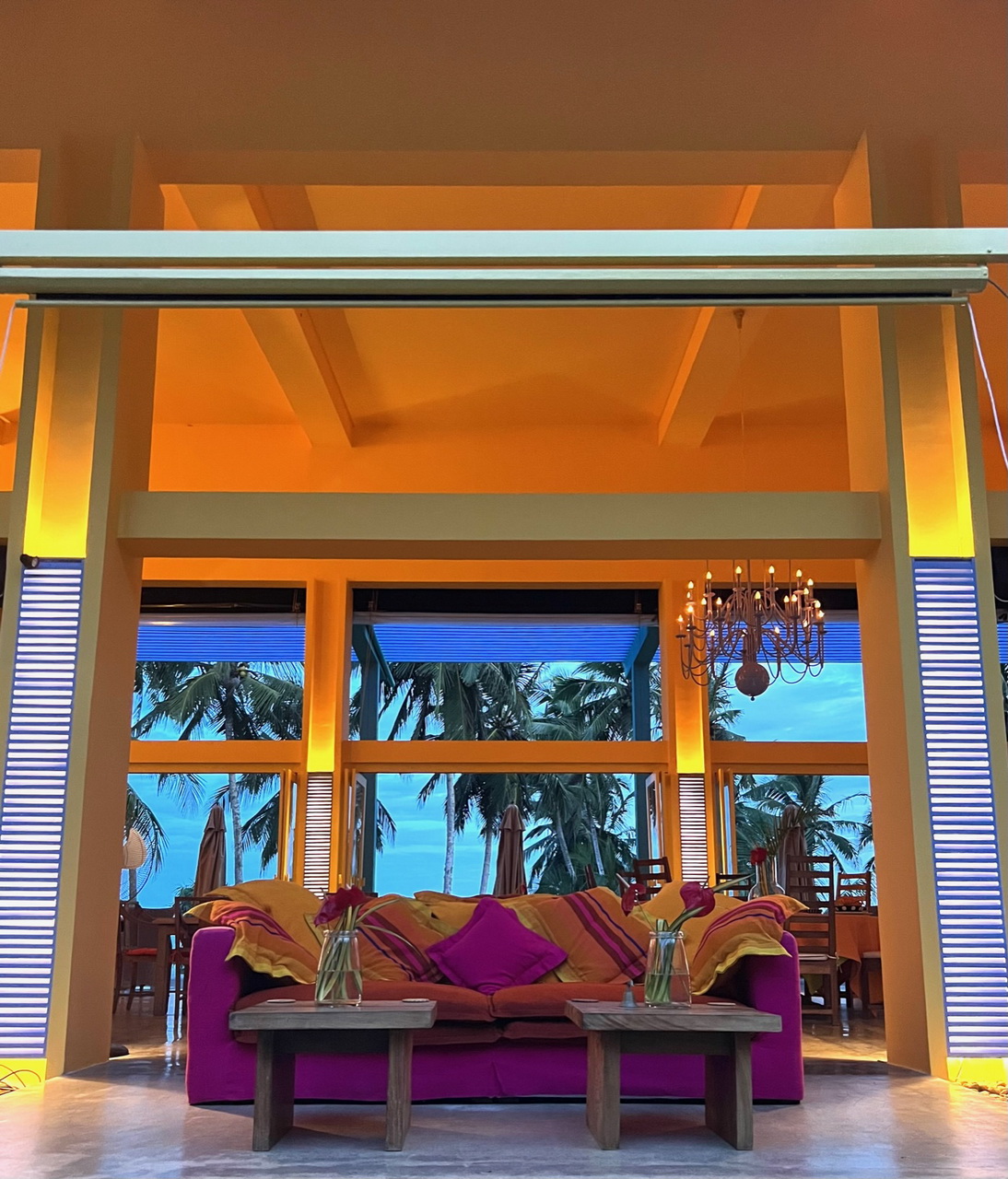 Springing to life on special occasions, often spontaneously, the amphitheatre provides an intimate venue for traditional performers and talented guests who might just be staying with us. Film nights under the stars are hugely popular, and usually an escape to a bygone era. Don’t be surprised to watch Casablanca all over again, it’s by far our most popular movie! At other times our amphitheatre is a perfect spot to enjoy a cuppa or chilled beer with a book, and music lovers are welcomed at Buckingham Place, with a piano to play and guitar that always needs tuning!

The hotel has played host to several impromptu performances as well as planned ones, often by world class performers who just happen to be with us on holiday.

If you are especially talented please let us know, if you want to play the piano and sing for your supper that is!

Our elevated property extends to a lower beach garden (with beach access) which has largely been set aside for re-wilding. Roughly 25% of this area has been allowed to regenerate with beach mangroves. Steadily, more palms are being grown to replace the older trees. We have left some space however, for beach volleyball and Rocky Ginger our feral pony to roam around in.

Bordered on the beachside by mangroves and coconut trees, this garden is a great place to make your own and to let of steam. Ask for a sun lounger or try making friends with Rocky G - just don’t let him nip you, he can be a bit keen! 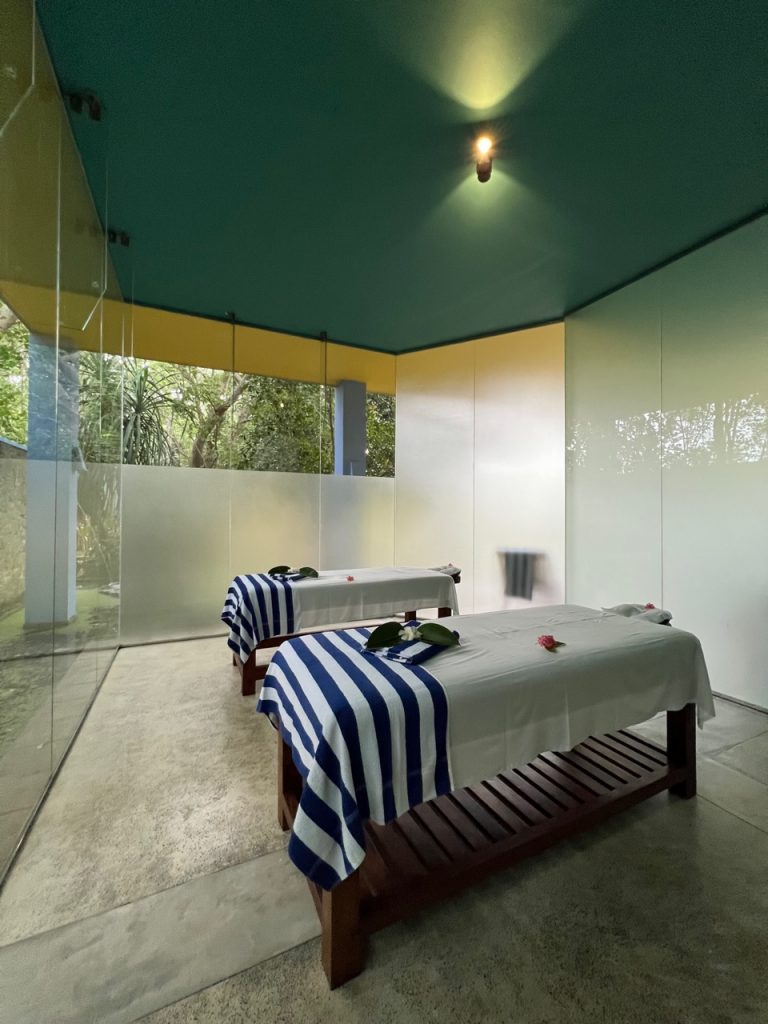 Buckingham Place recently opened a two treatment room facility, providing a wide range of services and choice of male / female therapists. Appointments can be made when you’re with us or prior to arrival - helpful in the case of short stays. Typical treatments shown below are by no means the full range. Recommendation; when staying mid-high season book early! 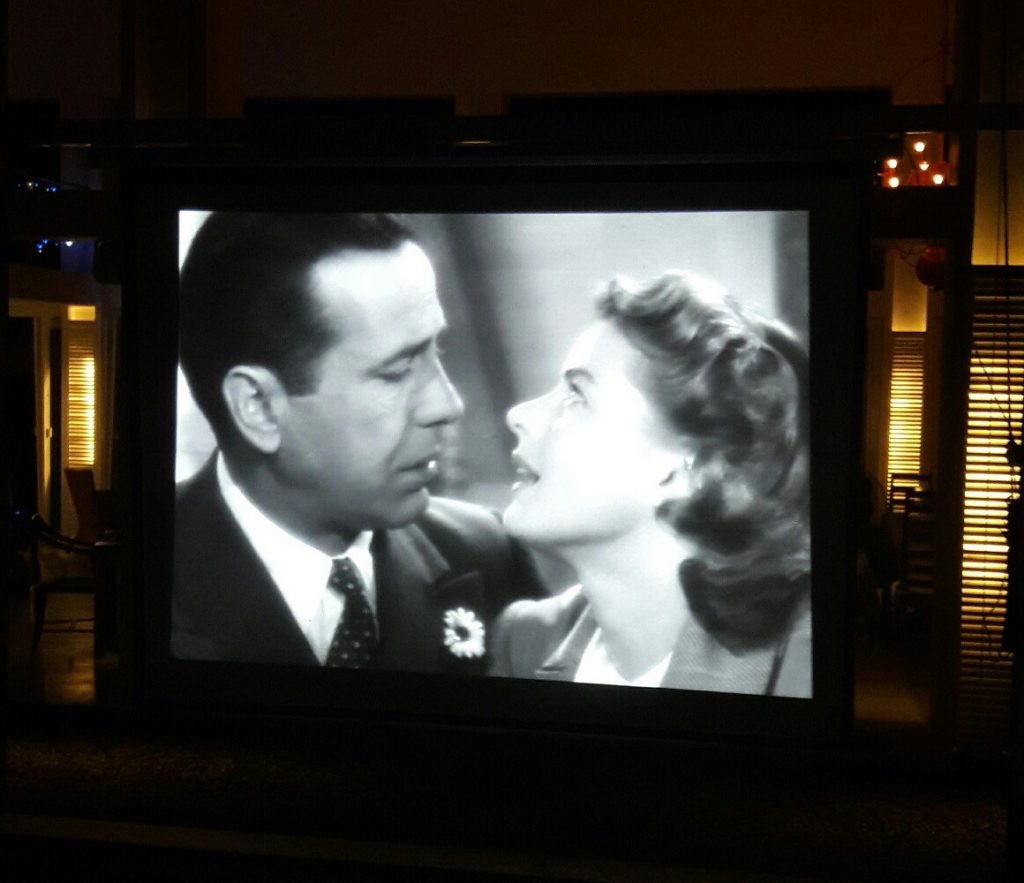 In addition to your suite the hotel has several quiet areas including an air-conditioned snooker/pool room.

There’s something for everybody, from books and classic board games such as Scrabble and Monopoly, to packs of playing cards and volleyball. 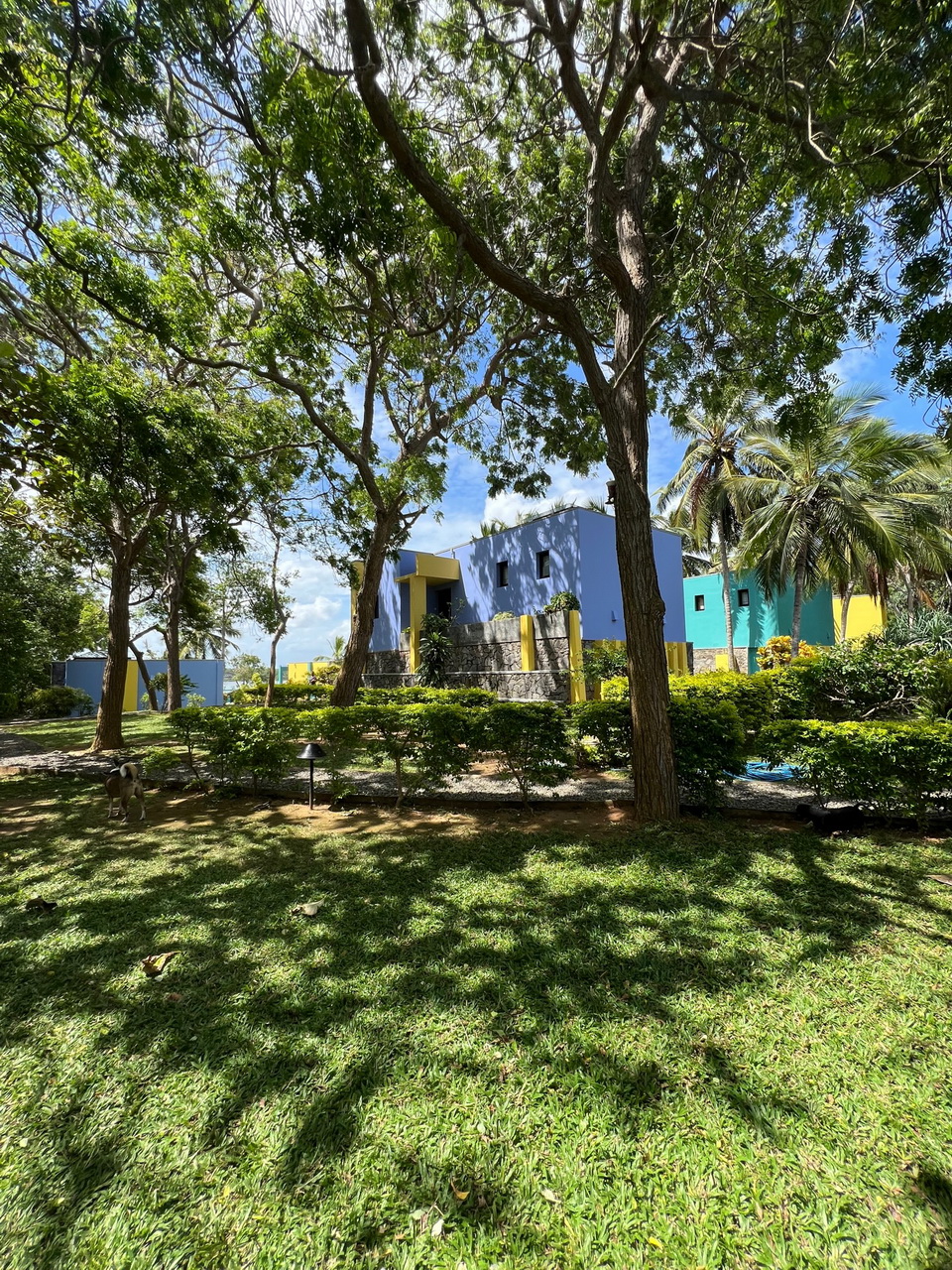 Wherever you want to be our gardens can transform into makeshift outdoor lounges on request. Pick your perfect spot under the shade of a big old tree or right under the sun, we’ll bring the beanbags or loungers in moments.

Our front garden for many years was the only garden and site of our first swimming pool. Away from the sea hence more popular with the wildlife, the garden is a great spot to relax, take in our biodiverse paradise and, while away your day. 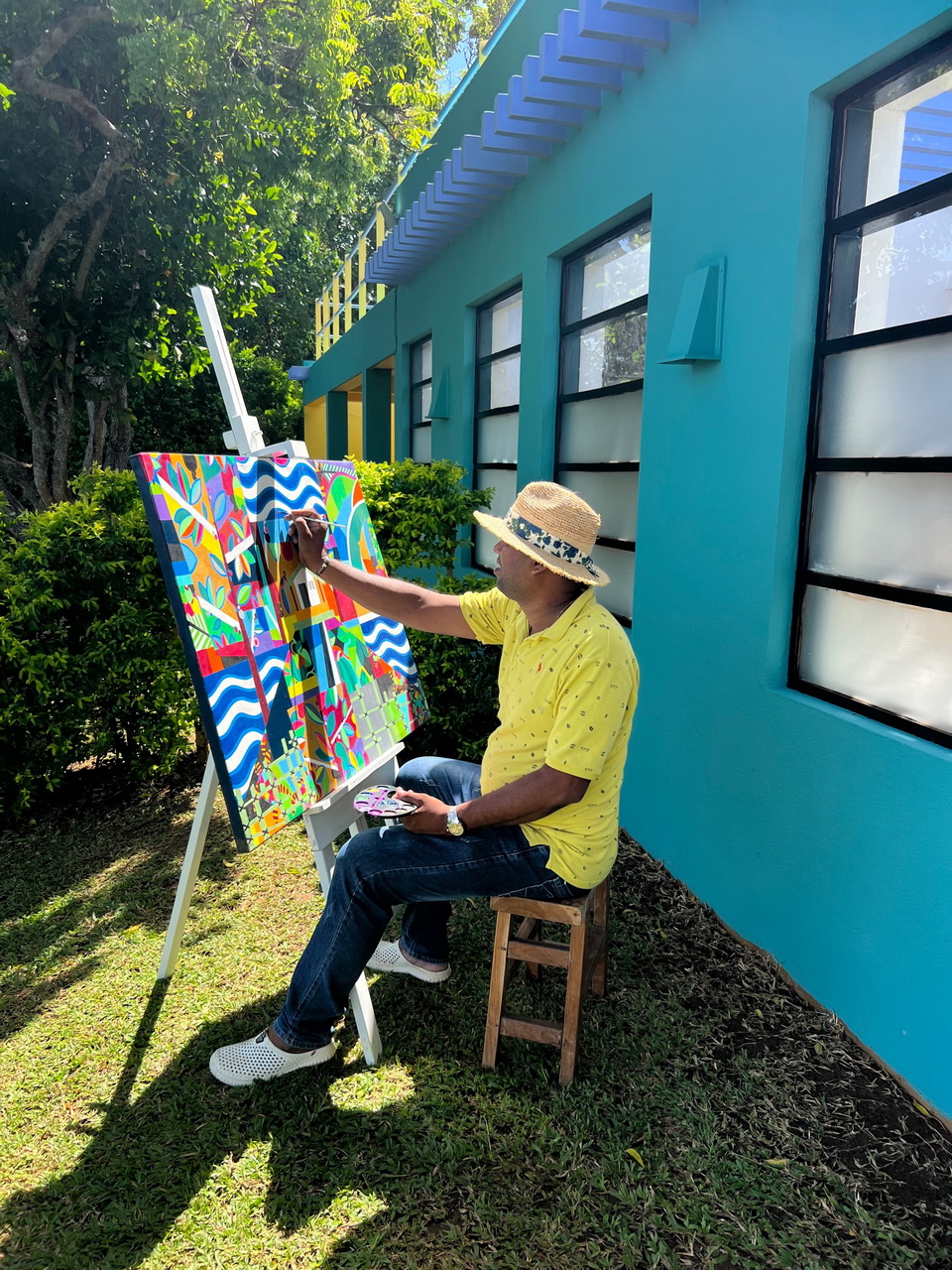 As construction of Buckingham Place neared completion in 2009, we gave a simple brief to local artist Sony Abedeera to ‘be inspired by the names and locations of our suites and rooms to produce unique paintings for them all’.

Sony fulfilled his brief admirably, so in 2016 it made perfect sense to commission further works from him for the new restaurant. It hadn’t occurred to us that his eight painting montage depicting the personality of the hotel, would became its focal point and introduce him to the world!

Opting out of a safe government job to paint full-time, Sony began taking commissions from admirers of his style, throughout Sri Lanka and here at the hotel. His most recent project Paradise Piano took several weeks, being endlessly stalled by guests so inspired by his style they commissioned paintings to go home with! Seeing the interest Sony generates as he paints, it was an obvious step to provide him with studio space plus, an opportunity to become our Artist in Residence for the season. Since re-launching him last November, he hasn’t looked back; as the hotel filled up again so did Sonny’s order book!

Sony Abedeera can be found most days in his studio at Oceanfront. He happily takes commissions ‘to go’ or send on later.

Inspired by collaborating with Sony, we now seek up and coming sculptors to create a unique sculpture garden…